A new report from Pew Research makes an attempt to better understand U.S. adults who get their news largely from social media platforms, and compare their understanding of current events and political knowledge to those who use other sources, like TV, radio and news publications. The top-level finding, according to Pew, is that social media news consumers tend to follow the news less closely and end up less informed on several key subjects.

That seems to reinforce a belief that many people already hold, of course — that people who get their news primarily from Facebook, for example, aren’t as informed.

But it’s important to understand how Pew Research came to this conclusion and debate to what extent it means the platforms are at fault, which is unclear from this data.

The firm first asked people how they most commonly get their news.

To be clear, any study that asks users to self-report how they do something isn’t going to be as useful as those that collect hard data on what the consumers actually do. In other words, people who think they’re getting most of their news from TV may be, in reality, undercounting the time they spent on social media — or vice versa.

That said, among this group of “primarily” social media news consumers, only 8% said they were following the key news story of the 2020 U.S. election “very closely,” compared with 37% of cable TV viewers who said the same, or the 33% of print users who also said this. The social media group, on this topic, was closer to the local TV group (11%).

On the topic of the coronavirus outbreak, only around a quarter (23%) of the primarily social media news consumers said they were following news of COVID-19 “very closely.” All other groups again reported a higher percentage, including those who primarily used cable TV (50%), national network TV (50%), news websites and apps (44%) and local TV (32%) for news.

Related to this finding, the survey respondents were also asked 29 different fact-based questions about news topics from recent days, including those on Trump’s impeachment, the COVID-19 outbreak and others. Those who scored the lowest on these topics were the consumers who said they primarily used social media to get their news.

Also, 45% of those who got their news primarily via websites and apps, meanwhile, had “high political knowledge,” compared with 42% for radio, 41% for print, 35% for cable TV and 29% for network TV.

The social media group of news consumers was also more exposed to fringe conspiracies, like the idea that the pandemic was intentionally planned. Nearly a quarter (26%) of those who primarily got their news via social media said they had heard “a lot” about this conspiracy, and a sizable 81% said they had at least “a little.” This was significantly higher than all other news platforms, and a indication of how much conspiracies can spread across social media. 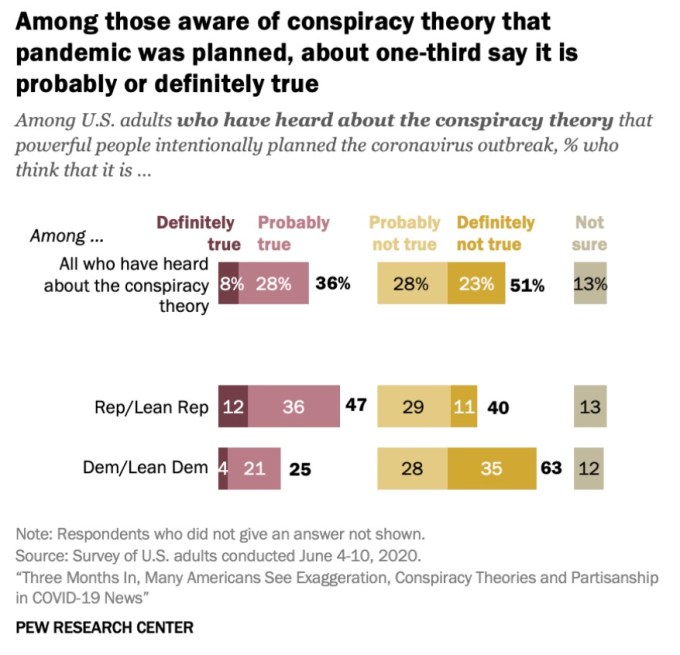 The study went on to compare social media news consumers’ knowledge of other topics, like COVID-19 impacts and related health news, with those who got their news from other sources, using similar methods. Again, the social media group came away with the least knowledgeable. 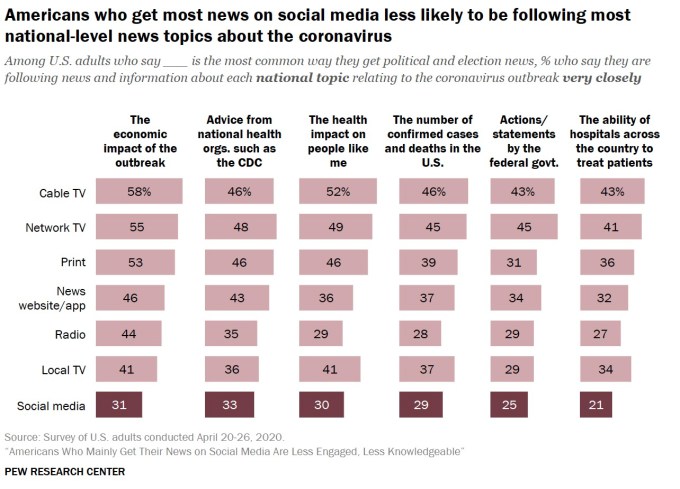 Pew’s conclusion from its research is that social media users are less informed, which seems fairly accurate on these specific topics. But the implication — or at least, what some people might take away from this report — is that they’re less informed because they rely on social media as their primary news source. That’s not necessarily true, given this data.

Historically, we know young people don’t engage with politics at the same level as older adults. They turn out at lower numbers during elections. They can be less engaged in their local politics because they’re relocating for college or for new jobs, because they haven’t made voting a habit and often miss registration deadlines. They may have had a poor education in civics to begin with and haven’t yet filled in the gaps the way older adults have. Many also feel alienated from politics. And so on.

On other topics, young people may also feel similarly distanced and disengaged. Many young adults have been unconcerned by the coronavirus outbreak, for example, thinking it only impacts older people, and carrying on as usual.

Their lack of knowledge, then, about the news may be due not to the platform where it’s consumed, but their interest and engagement with the topics in general.

US adults who mostly rely on social media for news are less informed, exposed to more conspiracies – TechCrunch 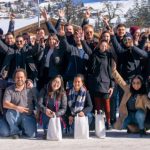 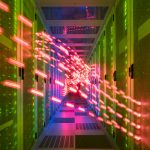 New Relic is changing its pricing model to encourage broader... 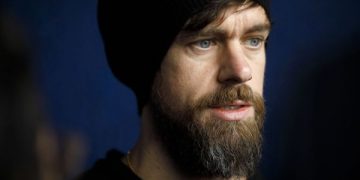