Reddit co-founder Alexis Ohanian, in an interview for Fortune, shared his upbeat perspective for the blockchain market. He was quite optimistic about the price predictions, and quite enthusiastic about the general development of blockchain industries, to the extent that he decided to leave Reddit in the sidelines to devote himself entirely to investment in blockchain technologies:

“I’m proud of all the work we did to turn around Reddit in the last three years, but I think about the impact I could have at one company versus the potential I could have investing in dozens of great, multibillion-dollar companies – and that’s the way I want to scale my next decade.”

Serena Williams’ husband, took a 16-week break after the birth of his daughter, to later return with all his energy focused on expanding his business vision. Ohanian commented that the development of companies focused on blockchain technologies are a great investment opportunity, especially for those visionaries responsible for managing Venture Capital Firms:

“Last year, it was all about AI and machine learning, This year, it’s all about blockchain. Most of it is just hype and BS, just like how it was with AI and ML. Most of the really vital, protocol-level, basic infrastructure around software and blockchain will need to get built in the next year or two for us to really see the Web 3.0 we’re really hoping for. So those are the types of companies we’re investing in now. These are the types of things I think will build the foundation for a very different, much better Internet.”

While Onahian states that “This stuff doesn’t actually change the world unless everyone is using it,” he is also aware that the market for cryptocurrency and blockchain technologies is heading toward that direction, with a steady growth that is “just starting to happen now.”

One of the bloopers of the interview was precisely what had the most coverage: When asked about his expectations about the prices of at least Bitcoin and Ethereum by the end of the year, he replied:

Despite being a much lower figure, Ohanian’s predictions are proportionally more optimistic for Ethereum than for Bitcoin, as while Bitcoin had reached that value – at historical maximum – Ethereum would be exceeding its maximum record assuming that his predictions were met.

Maximum prices of Bitcoin according to Coinmarketcap: 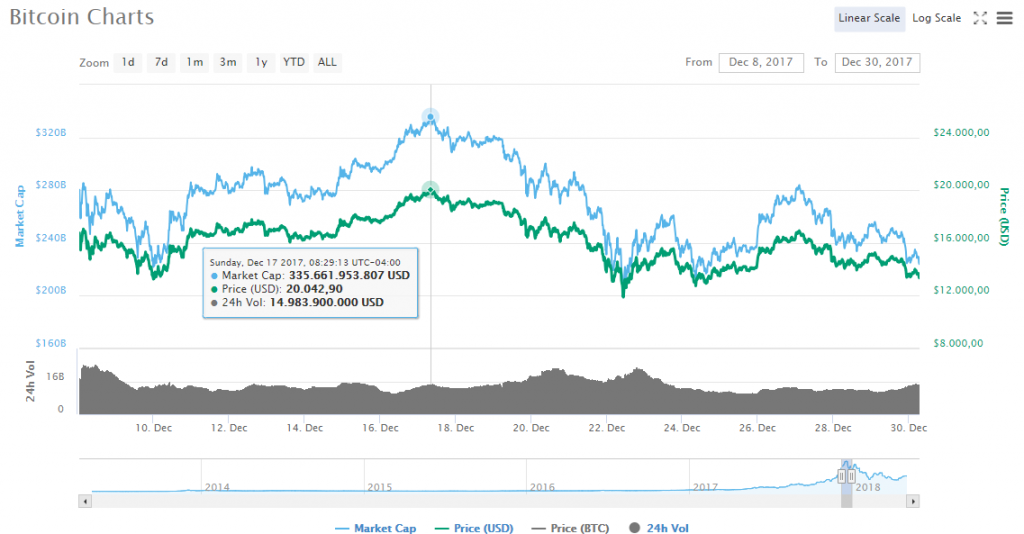 Maximum prices of Ethereum according to Coinmarketcap: 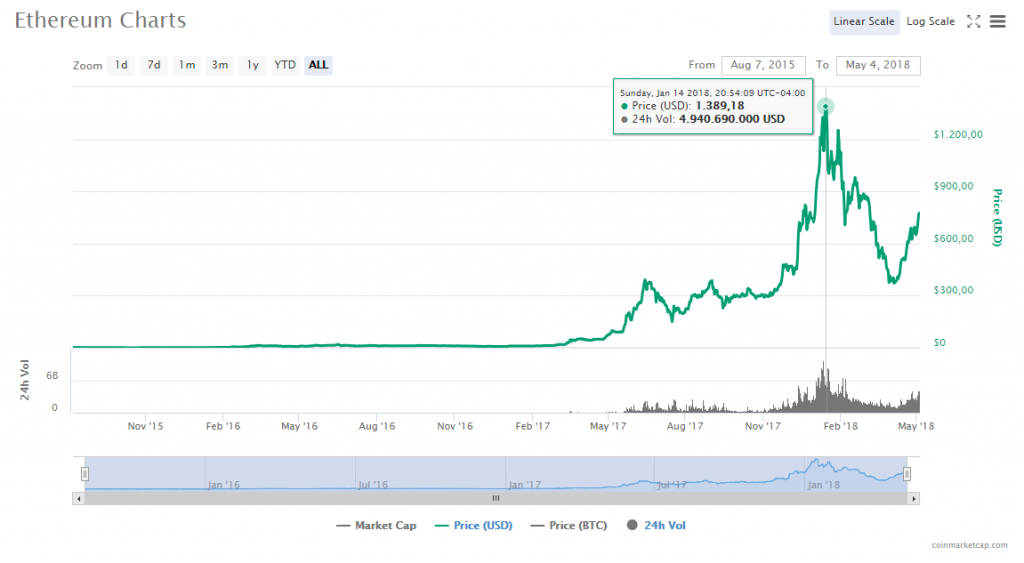 The reasons why Ethereum is more bullish than Bitcoin are practical: While Bitcoin is growing to become a mechanism for value storage, the real importance of Ethereum is that its growth is taking place thanks to the development of more and more applications running on its platform. Both cryptos complement each other by having different objectives, according to his vision:

“I still hold a little bit of Bitcoin, and I think it has such mindshare that it will continue to be a store of value. I’m most bullish about Ethereum simply because people are actually building on it. It’s still early days, but you know, we’ve got a few CryptoKitties … We didn’t invest, but it didn’t surprise me one bit that they raised [funding] because they had the first real application.”

Beyond fundamental analysis, the indicators of technical analysis seem to prove the famous investor right. Both the Heinkin Ashi sails and the general stats show an evident bullish behavior that can be well exploited before any correction happens.

Alexis Ohanian Reddit Cofounder | “This Year It’s All About Blockchain.”

US unemployment rate falls below 3.9% in March

Has the internet been good for society? Fewer saying yes 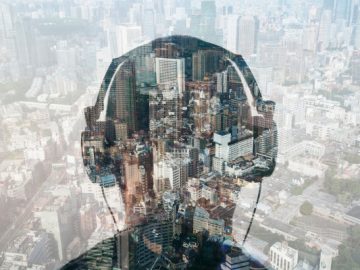 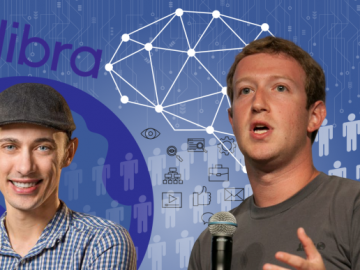